Overall urban planning and monument preservation concept
The integration of new museum use elements into the listed inventory of the KyffhÃ¤user plateau and the medieval castle complexes requires an overall picture of past and present, merged into a sustainable model. All traces of the 19th century are made visible and legible again and enter into dialogue with the artifacts of the medieval layer. The aim is to strengthen the medieval history of the KyffhÃ¤user in order to be able to enter into dialogue with the Wilhelminian structure again on an equal footing. Structural settlements support and tie the layers of time together. Natural exhibits, such as rock formations of the standing stone, are tied together again to form a whole via the new level of open space design of the 21st century. Buildings (museum and reading hall, and especially the open space of the museum garden still show the original structure of the 19th century (architect Bruno Schmitz). These must therefore be preserved and integrated into the new structural concept. "Continue building in context" is the overriding guiding principle. The new cubature of the structural extensions nestles along the medieval ring wall and continues the centuries-old concept of the "built wall" with open castle courtyards.

Panoramic walkway along the ring wall Nature view - culture view,an audiovisual scenography
The course of the Panoramasteg is inscribed as a pass along the top of the wall. It fits in between the existing building fabric and the landscape formation and enables a new view of the medieval hilltop castle. The dominance of the 19th century by the KyffhÃ¤user Monument is thereby reduced thereby withdrawn. The medieval world moves back into the foreground and stands with the newly framed Barbarossa tower on an equal footing with the tower of the KyffhÃ¤user monument. The new panorama walkway traces the course of the outer ring wall - at times it hovers above it - at other times it is offset parallel to the inside; it offers a completely new space - us perception experience of the upper castle - spectacular views inwards into the castle and outwards into the landscape space with its manifold references are created and staged scenoraphically / museum-like.

The Barbarossa Tower, experiencing a myth
Both on and in the historic Barbarossa Tower, visitors will be immersed in the ancient myth of the Emperor Barbarossa (Frederick I), who, according to legend, waits for his return in the cave under the KyffhÃ¤user Mountains. The medieval stump of the structure, supplemented by a new viewing platform and an exhibition area, will be converted into a space for movement. In this imposing and authentic interior, visitors move up and down on a hydraulic platform. This movement is guided by a video installation, so that movement and image panorama merge into an impressive experience. The video installation changes as the visitor moves. It condenses or pulls itself up. Different video artists can create this video installation in the future. The artistic confrontation with the myth will be an important building block to stimulate the mediation and about the meaning and origin of the KyffhÃ¤user and to prevent the political misuse of the of myth and place. 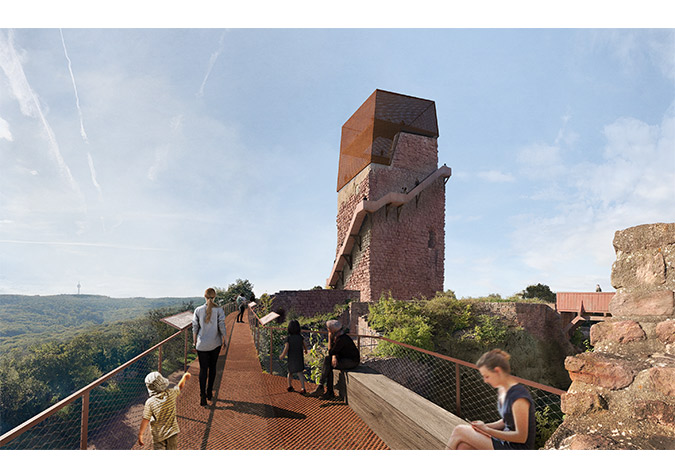 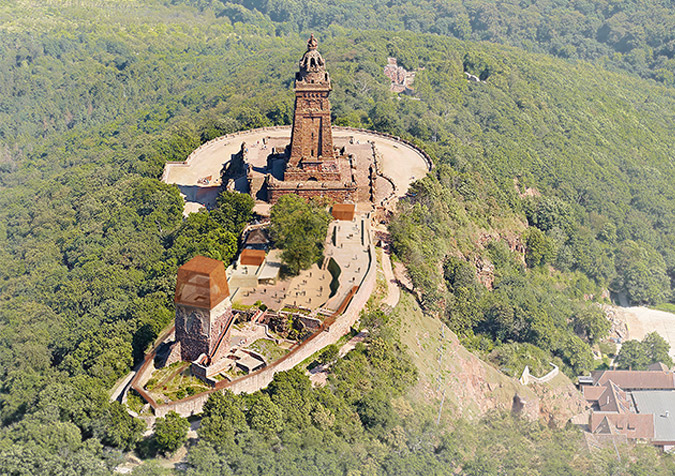 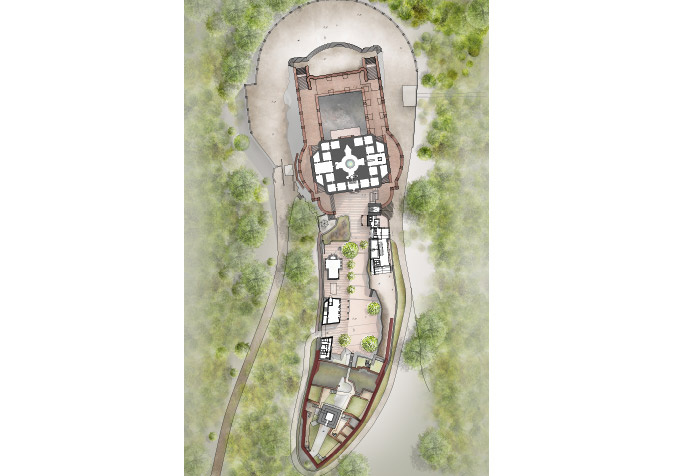 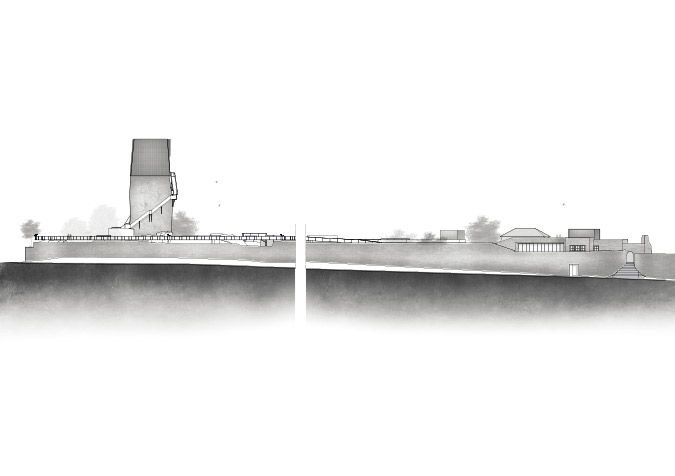 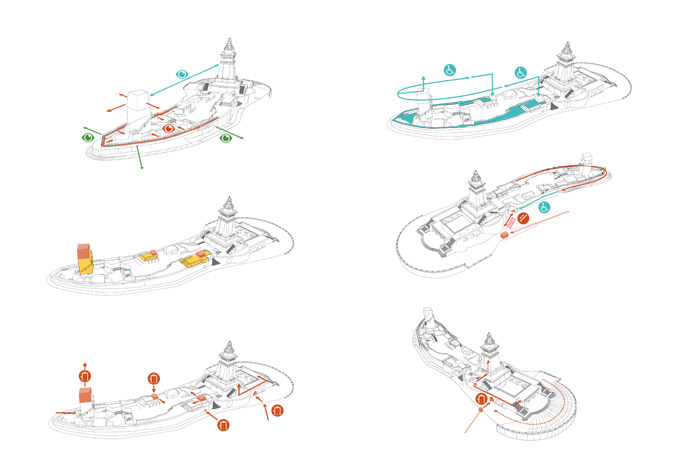 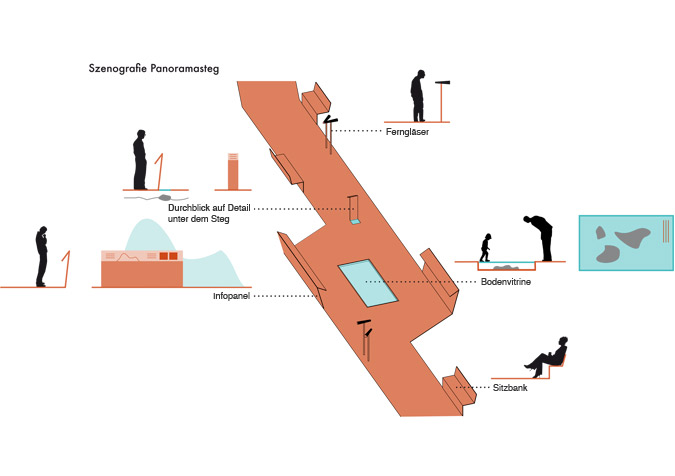 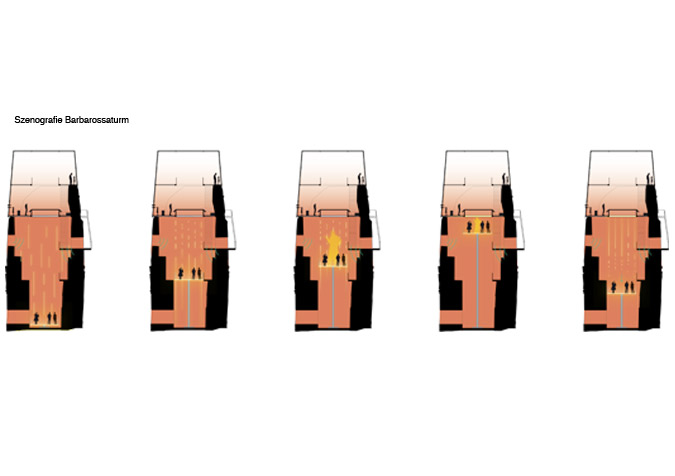 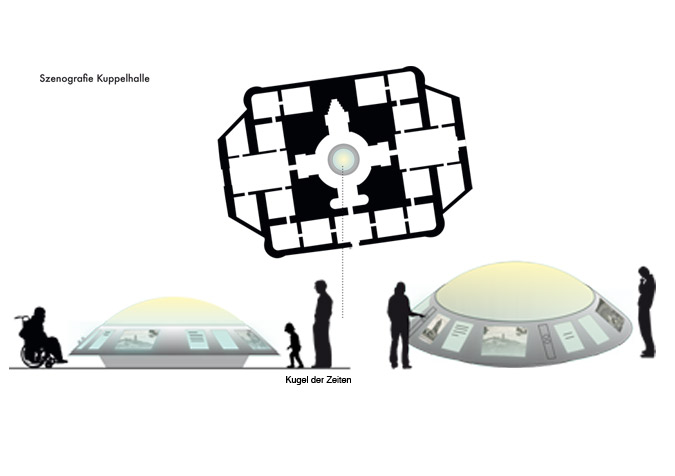